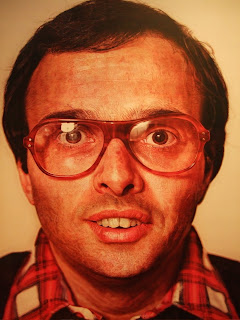 NYC is an easy place to disappear in. My last entry had me jumping headlong into parties and soaking up the atmosphere. I met up with old friends and quickly made new ones. I guess my entries stopped because I also wasn't sure of where to head for entertainment purposes. (ie. you the reader of my dribble)

I've also had a significant amount of guilt build-up since I left Austin. It's gone past a nice long holiday away and turned into a long-term experience. I suddenly realized that it was only through the help of my friends, family and supporters (you know who you are) that I've been able to take off like this. I guess I've questioned whether or not I deserve this shot at all.....if I've earned this time to play and soak up so much. Things back home have been both perfect and perfectly flawed....and I can only hold myself responsible for the failures.

All that being said and purged, moving on is really all I can do because going home to a ticker tape parade isn't an option just yet. So.....I'll continue onward.

Now that the acknowledgment of my absence is out of the way let's get back to what I've been up to.

After a first fun weekend with Michal and crew, I squatted in her old apartment in Greenwich Village for a few nights. Her old roommate Molly was nice enough to let me stay. It was a perfect location and I quickly started to feel like a real member of the town. The weather quickly turned to crap with rain and cold, but I was determined to spend my time OUT doing things. I braved the Subway system because my moto had proven to be a large pain. Simply parking it was a pain.....as I was constantly worried either about it being towed or stolen. It's my lifeline for the rest of the trip, so I found a safe spot on the NYU campus and parked it until it was time to put it on a plane.

After jumping the wrong train a few times and walking in the wrong direction, I finally found my way to Museum row by Central Park. I instinctively walked right up to the Guggenheim first. It's always been a dream to see it and "feel" it in person. Of course.....I was TOTALLY disappointed! The entire exterior is under "reconstruction" and the interior was full of half of the population of NYC....or at least every tourist in town. I braved the crowd for a bit and then got the hell out of there. It was NUTS! Oh well....I'll catch FLW's work again soon I'm sure.

The Guggenheim disappointment was followed by a trip the Jewish Museum and a cool Warhol exhibit that I'd only read about before covering 10 important Jews in history. I think I enjoyed that most....but I've realized that I'm easy when it comes to comparing modern art to classic works. The modern stuff appeals to me like TV.....only better.

While in the Jewish Museum I ended up getting abruptly kicked out at closing time with a fellow museum goer....Frankie. We were both viewing a video on the ever popular Holocaust and a security guard abruptly walked up and asked us to leave. (Trust me it was REALLY abrupt for a quiet museum) We laughed at each other's shared shock on the way down the stairs and it became quickly apparent that she was British and more specifically from London. I told her I was headed there in a few weeks and that coupled with the fact that we'd both just been tossed out on our asses made for enough common ground to try to hit other museums together. She also seemed significantly more qualified since she's been an intern at the MOMA for 3 months and works at the Tate in London. So.......I had an informed guide and we set out to see a bit more of the town in some really crappy weather.

Frankie took me to the Cloisters as far north on Manhattan as the subway runs. It was a truly cool place and gave me my first glimpse of New York (outside of Central Park) with beautiful views of things other than buildings. The Hudson really can be beautiful! The museum was cool too. I'd like to go on about specific things that spoke to me here, but it was mainly the scenery and quiet that kept me happy....the opposite of the Guggenheim. Ancient treasures and amazing tapestries abound there, but I mainly enjoyed the time away from the cliche bustle of the city. I think that everything I saw there seemed to be recreated and hung on a wall as art from Europe so my mind kept wandering over the pond to treasures like these displayed in their native setting. I hope to get a better sense of things soon....

The next day I made the trip out to Sea Cliff where John and Michelle live to ship my bike and do a bit of work for them. Of course.....getting my bike ready for shipping took MUCH longer than I'd anticipated. Even doing the oil change took the better part of a day with the time it took JUST to get the proper oil and tools to get it sorted. I was forced to push it to Thursday and then to Friday before I was able to get the bike to the shipper on Long Island near JFK airport. But....I got it off and after spending about 500 more than I intended to spend, the bike was off to London. I'm scheduled to receive it in London on the 13th, so I pushed my flight back to the 11th to give me more time to work for J&M and see a bit more of the city in the meantime.

John and Michelle have been great. I've gotten to spend more time with their boys Quinten and Ian and had more than a few good laughs with them all. Their hospitality is more akin to family. It's like staying with my sister and her family....if I only had a sister. It's so comfortable that some have doubted if I'll leave! :)

My life lesson this week is profound to me, but perhaps not that profound to most. I knew this long ago, but I've recently forgotten it or ignored its significance. It has to do with friendships. I am lucky enough to have many friends.....and make new ones easily it seems, but I've realized that I've recently taken many of my close friendships for granted. I've been so emerged in this trip, in my general life woes and in attempting to push off from it all that I've lost sight of a few around me that truly matter.

Just this past two weeks I spent a significant amount of time worrying about how a friend had wronged me and taken me for granted. I talked about it and complained about how I "don't deserve someone to blow me off like that"....but perhaps I did. I went to the trouble to see this friend and really got treated like I was a temporary fixture on the wall. Even with the glimpses I'd had of this person as someone who really cared and was sensitive to others underneath their layer of care-free.....I was proven wrong. Sometimes people really are as shallow as they seem and accepting this is WAY easier than trying to make them into something they are not.

Of late I've blown off quite a few friends that were reaching out to me by simply letting me know they are there or wanting to hang out. When we DO hang out I can often spend time just discussing my problems and forget that their problems/triumphs truly matter to me as well. I'm sorry if you fit into this category. If I hang out with you it generally means that I care about your life as well and enjoy relating to you. Today I've decided that new friends are great and cultivating new friendships is stimulating fun, but when my gut tells me that I smell a rat......it's likely a rat. As cliche as it is.....we all need to follow our gut instincts and I think mine are pretty good. Spend th time on those that deserve it people......not on the ones you WISHED deserved it. What a waste.....(soap box kicked away)

So.....many stories exist in the middle of this short (yes it seems short) update. I hope to get to tell my tales in person to many of you when I return. In the meantime.....which of you is going to meet me in Europe for a visit? ANYONE?

Updates soon to follow......I added more pics to my flickr account so check them out.....I hope they get better as time goes on. It seems that my iPhone pics are the best just because it's so readily available.