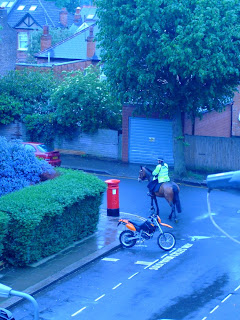 I'd say that London has been kind to me, but not my pocketbook. I've spent more than I budgeted for despite what everyone told me about it being so expensive here.

I really need to properly update this, but I just lack the time and motivation to spend an hour writing about all that has happened......all the minor details of 'adventure'.....however you define that.

bottom line: I got my motorcycle out of customs and spent almost $400 to do so. It took seven hours of walking around Heathrow airport and taking bus after bus to the proper shipping building. At the end of the day it seemed quite disorganized and random as to what they needed from me to give me my bike. I took off the straps, turned the key (apparently they forgot to unhook the battery) and started it right up. A short ride back to the airport terminal 4, $85 dollars paid to get my bags out of storage and 30 minutes spent in the parking lot trying to repack my bike properly. Blah....it was a long day, but a successful one as I rode down the road thinking (stay on the left side, stay on the left side). I will say one thing for sure....the GPS is the most valuable piece of equipment I have. It made riding around here almost easy.

I rode to Helen's house and it was fantastic. She lives in a big flat in north London and she was a fantastic host. Just to be able to relax.....use her shower and sleep in a quiet room was amazing! She asked if I wanted a cup of tea.....HELL YEAH!....best tea I've ever had.

I hung out here for the entire day yesterday just relaxing and enjoying quiet time and a BATH! I then went out to East London to see Octopus Project play on their first ever European tour! (A local Austin band favorite of mine) Helen is friends with Yvonne and Josh from the band (as are several of my friends back home) and we had a great time talking with them before and after the show. They played an excellent set and figured out that I was the only guy from Texas other than the band at the show.

After Helen took me for a proper English Curry shop and the long ever-expected tube ride/walk home.

Today I've decided to go to an Autojumble near Shouthampton about 2 hours south of here. London is great and I WILL return here, but I'm ready to move on before the cloudy weather turns to crappy rainy weather.

I hope to update this more properly later, but perhaps more stories will get in the way of describing the fun/trials I've had since my last proper update. Regardless....I'm healthy and well and looking forward to more time on the bike in England. Updates could take a while as I plan on camping the next few days.

Also.....you'll notice a new photo link. Flickr filled up quickly past my free monthly limit, so I've added a photobucket account with the new pics I've taken. I'll try to add better comments to it later. Thanks to all for reading....until next time...cheers!
Posted by Alan at 7:56 AM

Just say no to Photobucket. I'ma do my part to lead you back to the righteous path of Flickrness.

Your Mom here...Glad to know you are still breathing and doing some exploring...Stay safe, please...Cary and Staci had a new baby boy this week...Absolutely adorable...I will email you the photos! Michael is in Dubai...You are in London...and I am in Georgetown. I love you!