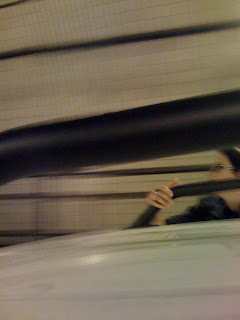 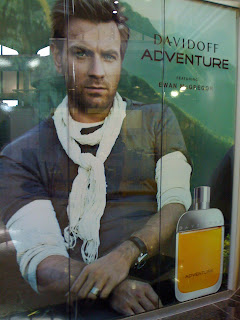 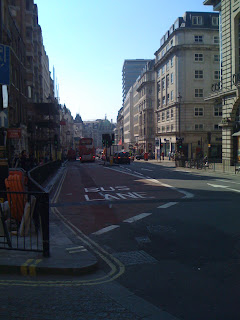 I got up this morning (Sunday) late and immediately started packing. I was honestly a bit sad about leaving the Capobiancos, but I loaded up with Michelle and headed out. We decided to drive to Manhattan and hang out at the MOMA for the day and then she'd drop me off at the airport. It ended up being one of the highlights of my trip so far....not because of the museum as much, but because Michelle and I had a freakin' blast. We went into the Modern restaurant below the museum...got loaded on ONE Cilantro Martini thingie (we were hungry)...ate some tiny expensive food and ran through the museum like madmen with only an hour to see the whole thing. The museum was amazing and I was overwhelmed in a short period, but we simply didn't have enough time. Ridiculous.....but still ridiculously FUN. Thanks Michelle.....we're totally doing that again....only I hope we can get extra loaded and stay extra long in the museum. The afternoon was priceless.

The blurry photo above shows Michelle riding on the outside of the car in the tunnel leaving Manhattan headed to the airport....needless to say the Martini still had a hold on our time.

Upon my arrival in the airport I was almost instantly greeted by the Ewan McGregor photo. Again...priceless. I'm hoping that after my adventure on my moto that they name a fragrance after me.....maybe call it "Shifty"...or "TOGE" for TheOneGoodEye?

I got on the plane with visions of sleep at 6:30, but like always I wasn't able to sleep on the plane. It was a nice flight though. I'd go so far as to say that it seemed short. I could've stayed longer to enjoy the pampering and place to relax.

I got off the plane and waited through a few hours of customs lines, but somehow they let me IN! I can't believe that a bag FULL of motorcycle parts and cryptic tools made it through customs AND security without a hitch. They didn't even open my checked bags to rummage through them....surprising.

I quickly found a place to hold my bags for about 20 bucks a DAY! My moto will not be here until Wednesday, so I had no choice....I couldn't run around London for two days with two fourty pound bags dragging behind me. Stefan and Kenneth could be right....I think I see a box filled with extras headed back to Austin in my future. I don't have as much stuff as you might think, but without the moto/pack mule KTM, I'm anchored heavily. I took a change of clothes, a toothbrush, my laptop and my guidebook and left the rest at Heathrow airport. It should get interesting when I have to find my way back out there to pick up the bike AND all that gear. FUN!

Anyway....I took the tube headed to London and didn't care where it was going. I got off at Piccadilly because that was the only stop that sounded familiar. Man....what a tourist trap. I mean....it's great and all because I'm in London, but I could've picked something a bit less American. I mean....within minutes of getting topside I saw a TGI Fridays, Planet Hollywood and two Starbucks. Damn....I thought I just flew over an ocean or two?

So....ridiculously groggy, I've managed to eat a sandwich, have a cappuccino and get online at an internet dungeon....yeah....dungeon. I just booked a hostel for a few nights at 15 pounds a night and I'm hoping to go check-in in a few....shower...nap and get out for something fun.

I'm glad you found a place to stay. I remember being deliriously tired when I landed in Ireland. It would have been really rough for me to have found a place in that state.

Did you know that Octopus Project is in the UK right now and will be in Europe for the rest of May? I think they might be following you.

Sweet....I NEED to catch a show of theirs here. That would be cool. .....CRAP! They played here last night and I missed it! There are a few other shows I might make. Thanks for the rec.

So now you'll need to learn how to ride wheelies on the wrong side of the road...that'll be hard!

is it tea time yet?